One of the benefits of being an AHS presenter was an opportunity to attend a MovNat One-day Workshop on Venice Beach the day after AHS.   I'm actually surprised that more presenters did not take advantage of the opportunity - however, I know that Melissa McEwen and Richard Nikoley had done the 5-day workshops in West Virginia (and Robb Wolf, Metzgar, and John Durant also have MovNat experience, according to Erwan), while some of the other presenters don't look quite like the tree-climbing type.  But among some AHS attendees, volunteers, and (shockingly) people from southern California who had no idea about AHS were Dr. BG, her sister, Dr. Eenfeldt, Jamie Scott, and myself.  On that foggy Sunday morning we arrived in vibrams, barefoot, or in other barefootesque shoes to the bleachers next to "muscle beach" at 8:45am sharp.

Why MovNat?  Well, of course, the best advertisement for this particular fitness method is its teachers - in America, Clifton Harski (in images ruthlessly swiped from his blog): 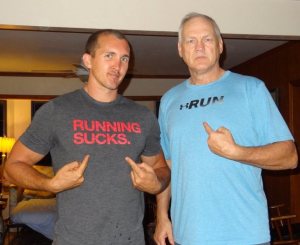 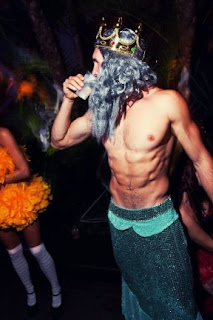 And, of course, the legendary French founder of MovNat, Erwan le Corre, also known as the World's Fittest Man, who had a great talk on the second day of AHS proper. 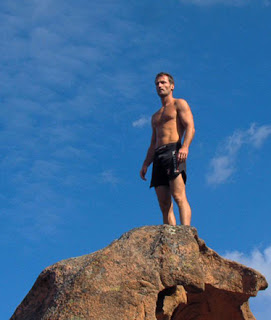 Let's just say that when the shirts came off as the weather warmed up, the whistles from Venice Beach were not for me.  (In full disclosure, I did not remove my shirt).

MovNat is actually very simple (in some ways deceivingly so).  We learned to run, carry, lift, climb, throw, crawl, and balance, and more importantly to think about moving in a natural human way.  Most of us had spent many hours in the gym learning to isolate body parts and perform exercises to maximize both muscle burn and safety - but often these stereotyped movements have little utility (other than basic strength or stamina) when it comes to survival on planet Earth.  Sure, you can do a pull-up on a bar - can you do a pull up on a wider tree branch?  Or a step?  Can you lift a rock instead of a barbell?  Maybe you have a 6 minute mile on a track, but how fast and efficiently can you move on the trail, through the jungle, requiring ducking, crawling, careful foot placement, balance, and jumping past obstacles.  When you sit up, do you muscle yourself up like at the gym, or do you raise your legs and flop up efficiently as you did when you were a kid?  Guess which one is the MovNat way?

Jungle running, climbing, and balancing sound intimidating.  And even though I go to Crossfit, I'm pretty much the weakest one at the gym, and I've always been more likely to be picked last for a sports team than first.  I wanted to go to MovNat because I don't think that I move all that well.  What surprised me is that I was already good at many things we were asked to do.  People at the workshop were every fitness level - from RKC kettlebell instructor/gym owners to parkour enthusiasts to chiropractors, a family medicine doctor from my hometown, a radiologist,  and a mom who walks on the beach, yet everyone seemed to learn something, and each exercise was scaled for all fitness levels.

I cannot, typically, do a standard pull-up from a dead hang.  I just don't have the upper body strength (yet).  Sometimes I'm able to crank one out - if I'm not tired and I cheat a little - and I can do a chin-up, but I was able to climb on top of the bars at Venice Beach multiple times using the most efficient strategy taught by Erwan.  (I did end up with some pretty intense bruises from the climbing - but that's just because I was so exhilarated getting on top of that bar!) I could also climb a pole and fireman carry some surprisingly heavy fellow paleo bloggers.

There was considerable time in the day for rest, recovery, and reflection.  In those times Erwan and Clifton explained some of the MovNat philosophy.  As a psychiatrist, I see plenty of Zoo Humans like myself, most very much afflicted by the painful incongruence between or modern world and the natural  world to which we are evolved.  This difference plagues our minds as well as our bodies.  Erwan plugged some relaxation and mindful living very much in line with what the academics who study mindfulness will teach - live in the moment, exist using your senses, cultivate thinking using the "third eye" or the eye at the top of the pyramid (like on the dollar bill) above yourself, not within yourself (Erwan did not use that exact analogy but something very similar), and don't think so much in general.  Sleep late if you need to! (I'm thinking Erwan does not have small children). Swing from trees.  Be happy and gorgeous and human.

The day was not without struggle and suffering - also a large part of being human.

For me, I hope to encourage my kids to climb trees and balance and play tag and move - while they teach me the other secrets of natural, efficient human movement they do all on their own.  I'm also seriously considering a 7-day workshop in Thailand (one of my work colleagues would love to go too).   A week without shoes, suffering in the jungle sounds just about perfect.

Just one more note about the instructors - I could not describe Erwan as down-to-earth (perhaps because I keep imagining his home in Santa Fe as a tree house*), but he was funny, generous, and an exceptional person.  He heals bodies and minds and bridges the natural world with the flamboyant setting of Venice Beach with a somewhat unearthly serenity (ironically, his serenity is most likely derived from the natural world - so perhaps very earthly).  Clifton was his perfect foil - practical, organized, also funny, and very approachable.  He has a degree in kinesiology and sought out MovNat because he saw the incomplete picture of all the zillion different fitness methods in which he had immersed himself.

So, all in all, if you have basic mobility and can hang from a bar, you will learn something from MovNat.  It's innate, deceivingly simple, and marvelous.

* (I have no idea what Erwan le Corre's home looks like)