On the personal front we are going full speed ahead into fall, school, apple picking, corn mazes, and sweater weather. I also decided to participate in a little n=1 experiment of caffeine elimination for 24 days along with Dallas Hartwig, who apparently does an elimination of this sort at least once a year. He drinks quite a bit of coffee and the occasional detox seems prudent. For me, I figured there wouldn't be much difference in my life with or without caffeine. I rarely drink coffee, and a typical day will see me drinking 0-3 cups of tea, most days one. Since I could skip a day of caffeine without even noticing, I imagined there wouldn't be caffeine withdrawal.

I was surprised about 52 hours after my last dose when the classic headache and a combination of irritability and cognitive fog set in. (Withdrawal can begin as early as 12 hours, typically peaks at 48 hours, and can last 2-9 days total). Mine lasted about 6 hours until I went to bed, and it was gone the next morning. Over the next three weeks, I noticed my sleep was improved, muscle tension was noticeably decreased at the end of a clinic day, and I missed caffeine the most on Monday mornings, Wednesday afternoons (not surprising, my longer clinic day), and, unexpectedly, Sunday mornings. For the first week and even into the second I still didn't feel quite as "sharp," though that feeling began to pass a little by the third week. The experiment ends in a couple of days, and I have plans to moderate my caffeine intake a little more than I did before. Maybe 3 days a week instead of most days a week (thinking of those "most missed" times), and probably won't exceed a single cup of tea. All told, I learned some things, and I'm glad I did the experiment. Probably a worthy one for most people to do, as long as the withdrawal isn't too debilitating.

Last week we left off with some review of zinc, before that a bit of a review of the pathophysiology of depressive disorders in the brain. Today I would like to tie that together from the most recent review article and then discuss the overall human clinical data about zinc as an antidepressant.

Damage to the brain in major depression in the hippocampus seems to occur in part due to overstimulation of the NMDA receptors (by glutamate or similar substances). The overstimulation leads to a large influx of calcium molecules into the cells which results in damage to the neurons and can stimulate programmed cell death. Zinc can turn off this cascade to some extent, because it is a non-competitive inhibitor of the NMDA receptor, which means it keeps the receptor from being quite as easily activated. Thus it could potentially decrease the amount of damage done during a period of high stress.

In addition, zinc spurs the production of the brain fertilizer, BDNF, in the hipocampus, leading to recovery, nerve regeneration, and repair. Below is a modified diagram from the review similar to the ones I posted a couple of weeks ago with much of the zinc penciled in (IN COLOR. hah). For more step by step explanation, please go back to my previous post. Click the diagram to make it larger. 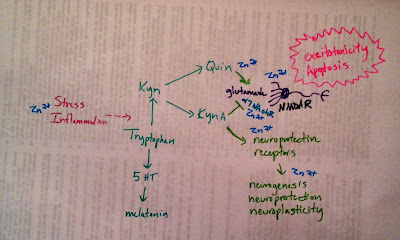 So now, the human data, which works better as a list:

1) In healthy humans, zinc levels in the central nervous system and in the serum tend to be equivalent with free passage through the blood brain barrier.
2) A post-mortum study of schizophrenic patients showed 50% reduction in brain zinc (particularly in the hippocampus) compared to controls.
3) In neurodegenerative diseases, reductions in brain zinc tend to be higher than reductions in serum zinc.
4) Numerous studies link lower serum zinc levels to increased depression scores on a rating scale (there is even some linear correlation, making zinc a reasonable candidate as a biomarker for depression).
5) Zinc levels are lower in treatment resistant patients (in some but not all studies).
6) Patients whose depression improves also have recovery of zinc levels.
7) People who are depressed tend to have lower zinc levels and lower zinc intake (eating less meat, fish, and legumes, and I'm assuming oysters), but hospitalized depressed patients fed the same diet as controls also had lower zinc levels than the controls.
8) Intense, competitive, anxious "Type A" personalities tend to excrete more zinc under stress than the more laid back, "Type B" sort of person.
9) Zinc is excreted in hyperactive kids exposed to artificial food dyes but not in kids who weren't hyperactive in a small study.
10) Zinc supplementation can increase testosterone in zinc-deficient men, and low testosterone is associated with depression.
11) In several (small) randomized trials, zinc (25mg) plus an antidepressant elicited a more robust recovery than antidepressnt alone. Similar results have consistently been found in animal models.

Still, more data is needed, and more information is needed about the genetic differences in people in zinc absorption, sequestration, and secretion in healthy and unhealthy states. The upper limit of recommended zinc intake is 40mg daily, the recommended daily allowance is around 11-12. Temporary supplementation of less than the upper limit during a stressful period seems low-risk, but there is still much to learn.
Posted by Unknown at 1:54 PM 10 comments:

Terribly busy between back to school (both kids now have homework!) and my sister getting married last weekend (which required me to be a bridesmaid and also to supply a few adorable flower girls and some quick cross-country flying and jetlag). Also trying to get in our American Psychiatric Association Annual Meeting abstracts on time…my medical school class starts next week panic yet? 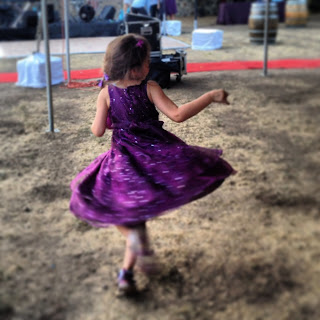 I'm still working on the nitty-gritty of zinc and depression from the last paper, but for a review: Zinc! An Antidepressant? at Psychology Today, so each click supports my research, writing, and the blog.

Trying to keep active and getting the girls out of doors as much as possible before the winter closes in. Not enough time for writing and thinking, but as always, those are luxuries, particularly in modern times. Doesn't that seem backwards? It seems to me there should be more time for leisure.

Keep eyes peeled for more on zinc and the pathophysiology of depression.