At long last!  Between Blogger going kaput for a couple of days and the usual stuff, my inositol post had to wait a bit.  I'm sure more people are interested in cannabis, but those are a few days away, assuming I don't get distracted by something else along the way (as is so often the case).

Anyway, the research team at Massachusetts General Hospital (I attended some of their meetings when I was a resident) just published a good paper in the Journal of Affective Disorders: Second-tier natural antidepressants: Review and critique.  This paper goes over R. rosea, chromium, 5-HTP, and inositol, but I'm going to start with inositol, as I could use some second messaging review myself, and I looked it up specifically for a patient as well.  Even though we are talking "natural" supplements here I still don't contend this is "evolutionary" psychiatry - none of our ancestors were chugging vats of inositol so far as I know - but figuring out how these things work helps us to understand biochemistry and speculate as to what could be going on that we might end up with an inositol deficiency, as it were.

First off - let's just mention the "first tier" natural antidepressants and complementary medicine treatments.  That is, stuff generally considered "herbals" or "alternative medicine" that has a solid evidence base in the scientific literature.  (I'm using the "quotes" because I don't see the need to distinguish these things so much - is there evidence base or not?  I don't care if someone thinks meditation is flakey or "new age" - does it work?  It certainly can!  With life-changing results.  Off my high horse).  The well-studied "herbals" with a "growing consensus of antidepressant effectiveness and safety" include St. John's Wort*, SAMe, and omega-3 fatty acids.   Folate, acupuncture, and exercise are other alternative treatments that have some studies of efficacy as antidepressants.

So, inositol doesn't have as much evidence base as any of the treatments in the previous paragraph, but we'll talk about what it is, and the evidence we have. (SAMe has shown efficacy in at least 20 trials over the years, some larger than others, some better controlled than others, so it is my "favorite" alternative treatment - but it can cause mania, and unless your folate cycle is humming along, can become evil homocysteine, so be warned).

So - inositol is a sugar alcohol and an isomer of glucose, and its 9 varieties are found mostly within cell membranes.  Myo-inositol is the most abundant stereoisomer, making up 95% of the total free inositol in the body.  Humans generally consume about a gram of inositol a day, and it is abundant in grains, beans, nuts, and fruits.  (You might not be surprised to know the best sources are organ meats - beef heart and liver, but also wheat germ - but, uh oh - wouldn't the phytic acid in wheat germ bind up inositol - well, inositol is a part of phytic acid, which we can't actually break down, so, typically, animal sources will be more bioavailable than the phytate plant sources of inositol.)  However, I ain't gonna lie - we can make inositol from glucose, and there's no evidence that we have a limited capacity to make inositol so that a dietary deficiency may not matter.  We eat maybe a gram a day, and our kidneys make about 2 grams a day.  Inositol is sometimes called "Vitamin B8."

So what does inositol do in the human body?  Well, tons of things, actually.  It is a key part of the second messenger system.  Que?  Well, in the pony express line that is a cell, surface proteins and receptor complexes (the mailer) hand off signals to the second messengers (the riders on the ponies) who pass the signal along eventually to other cell systems (the message recipients), such as the nucleus.  All the major neurotransmitter systems use inositol as part of their messaging line - I'm talking dopamine, norepinephrine, serotonin, acetylcholine… "The potential importance of inositol in psychiatric disorders is thereby evident when one considers the number of receptor types/subtypes that interact with this signal transduction pathway."

Biochem nerds will already know this next bit, but biochem nerd wanna-be's listen up (the rest of you can skip to after the picture, because this bit is a little dry) => Inositol is used to make inositol triphosphate (IP3) and diacylglycerol (DAG).  IP3 binds IP3 receptors, particularly calcium channels in the endoplasmic reticulum, which will cause calcium levels in the cytoplasm to increase, causing a cascade of intracellular activity.  Calcium and DAG can activate protein kinase C, which (as all kinases do) goes around sticking phosphates on things, leading to altered activity. Anyone learning molecular biology and biochemistry will see this pathway mentioned so many times your eyeballs will glaze over.  So, in short, inositol is vital. 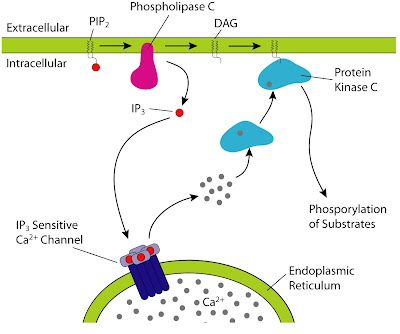 There has been discussion in the comments on my lithium posts about lithium interfering with inositol metabolism - specifically it interferes with inositol monophosphatase possibly leading to reduced recycling of inositol and IP3 in the cell and reduced inositol levels (1) however - it is unclear that the actual end product is a reduction of second messenging or something else.  One theory of bipolar disorder is that it is caused by "hyperkinetic second messenger systems." This imaging study seems to confirm that something screwy is going on with second messenger systems in bipolar disorder, but no one is sure yet what the heck it all means.  By this same theory, the "depression" side of bipolar disorder might result from a reduction of inositol after the manic episodes, and depressive disorders might result from reduced signaling in the first place, leading to inefficient cell energetics, mechanics, and build-up of toxic calcium in the wrong places at the wrong times.  Sounds nasty.

Ready for the clinical data (ie the really interesting and more practical stuff)??   A study back in 1978 found decreased inositol levels in the spinal fluid of depressed patients.  However, subsequent studies didn't replicate the finding, and that levels of inositol in the spinal fluid didn't predict response to inositol. But post-mortem examination of suicide victims have shown lowered myo-inositol levels, and magnetic resonance spectroscopy showed reduced myo-inositol levels in the frontal lobes of bipolar and unipolar depressed patients.  Dietary administration has been shown to increase inositol concentration within the central nervous system in humans (2).

But does it work?  In the comments, more than once people have mentioned taking inositol 750mg several times a day with good effect.  Well, there are a number of trials, some controlled, some open-label.  In the trials, an average dose was 12 GRAMS a day (which would be 16 of those 750mg capsules - divided 2-4 times a day - which would mean you would go through this bottle in a little over six days, putting the monthly cost minus shipping at about $34… inositol is also available as a powder which seems like it could be a bit more cost-effective for the "prescription" doses studied).  Some trials showed no benefit, but others showed no improvement at 2 weeks, but a definite improvement at 4 weeks.  Trials (as an adjunctive treatment, meaning with mood stabilizers) in bipolar depression were a little more promising.  One patient did develop mania after 24 weeks on inositol.  Most of these studies were done on people who did not respond to traditional antidepressants, and so even a modest effect is promising, as so-called "treatment resistant" patients tend to be "treatment resistant" to all kinds of interventions.  Additional studies (typically using even more inositol - 18 grams a day) had positive results for anxiety, bulimia, and obsessive compulsive disorder.  Inositol seems to act on these disorders a bit like nature's SSRI.

What is inositol's downside (besides needing to take mountains of it) - side effects in these trials included mild increases in plasma glucose, gas, nausea, sleepiness, insomnia, dizziness, and headache, and then there are the case reports of mania (any antidepressant, including light therapy, can cause mania in vulnerable people.)  No one dropped out of the trials due to side effects from inositol.  Inositol does not appear to have any drug-drug interactions - however, it might induce uterine contractions in pregnant women, so should not be used in pregnancy (3).

In the end, inositol might be helpful for some people, and it would be interesting to see if the organ-meat eating paleos have higher inositol levels in the CNS than your average grain eater.  But you'd have to eat a lot of beef heart to reach 12 grams daily.

*about St. John's Wort - product studies I have seen in the past suggest you are unlikely to get standard doses or product in SJW off the shelf, also it is most probably an MAOI and definitely has major drug interactions, such as with birth control pills and coumadin - SJW is not a product I routinely recommend for those reasons - BUT in the RCTs of pharmaceutical grade - one of which was done by this same Massachusetts General Hospital research group-  it worked as well as prescription antidepressants.  Chris Kresser suggests that this is because they all work as well as placebo.  Personally I think from reviews of published and unpublished studies prescription antidepressants give you a 10% advantage over placebo in the short term and likely work better in the long term, but they are a pain in many ways, have side effects, and the long-term effects are generally unknown… my favorite source for unbiased evidenced-based information on psychiatric meds is Dr. Daniel Carlat his team at The Carlat Report.  He has a great blog focused on industry influence and sniffing out misleading information but it is geared more toward psychiatrists than the layperson.
Posted by Unknown at 3:44 PM