Paul Whiteley*, I believe, originally posted to the comments concerning some very interesting studies on diets and violence. Over the past 10 years, several groups of researchers have done some decent work in this area, and (for once in the nutritional-type literature) I can actually look at a randomized controlled trial of good size and design that was actually replicated.

The modern era of good studies begins with Oxford nutrition and criminology researcher, Bernard Gesch (1). Back in 2002, he published a (full free text) study entitled "Influence of supplementary vitamins, minerals, and essential fatty acids on the antisocial behavior of young adult prisoners." In this study, 231 (young, male, adult, prisoner) volunteers agreed to receive a daily vitamin, mineral, and essential fatty acid supplementation or placebo. The average length of the supplementation was about 142 days, and a number of measures were taken before and during the active phase, including psychological testing, reports of violent acts, and reports of disciplinary action. Prisoners were randomized in part based on baseline disciplinary status and their progress in the "prison regime."

Here are the active ingredients of the multimineral, multivitamin, one of which the prisoners in the active arm received daily: 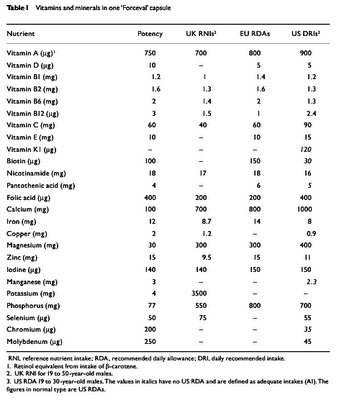 The results? The average number of "disciplinary incidents per 1000 person-days" dropped from 16 to 10.4 in the active group (p<0.001), which is a 35% reduction, whereas the placebo group only dropped by 6.7%. Especially violent incidents in the active group dropped by 37%, and in the placebo group only 10.1%. That's a pretty impressive finding, really. Currently, Gesch is working on a study of 1000 prisoners in 3 different UK prisons for a 3 year trial, including blood chemistry analysis to see what the baseline levels of micronutrients are in the prisoners, and also more cognitive testing, designed to answer some questions the earlier study couldn't answer. However, luckily for us (as the newer Gesch results have yet to be published), a Dutch research team led by Zaalberg repeated the experiment (more or less) in "Effects of Nutritional Supplementation on Aggression, Rule-Breaking, and Psychopathology Among Young Adult Prisoners." The researchers note that behavior issues have been linked to deficiencies in omega 3 fatty acids, and that low levels of magnesium and zinc are also associated with hyperactive behavior, impaired brain development, and cognitive dysfunction. Check out the quote from the study:

The mechanisms underlying potential associations between nutrition and behavior, however, are not yet clearly established. Although a clear comprehensive theory is lacking, several findings do offer some clues on the plausibility of dietary interventions. Epidemiological research, for instance, shows that major changes in dietary patterns over time have taken place, especially in industrialized world during the last century [Cordain et al., 2005; Crawford et al., 1999; Muskiet, 2005; Simopoulos, 1999]. These changes resulted in (micro)nutrient intakes that are significantly lower than in the ancient, Paleolithic diet. Indeed, some ecological studies show correlations between diet and behavioral outcomes [Christensen and Christensen, 1988; Hibbeln, 2001; Peet, 2004], including criminal behavior [Hibbeln, 2001]. A major limitation of epidemiological studies is, however, the impossibility of making causal inferences. For this reason, the findings mentioned above must be judged with caution and experimental confirmation is needed.

(I love these researchers already!) They did this trial specifically to see if they could replicate Gesch's work. Only they made some very likeable modifications in their supplement - specifically leaving out linoleic acid "because of its abundance in the Dutch diet", and using larger capsules that could include more bioavailable forms of minerals, so there was more magnesium (300mg of Mg citrate vs 30mg (of ?) in the Gesch trial). They also halved the amount of vitamin D (from 400 IU to 200 IU) in the supplement (but did not specify why). And no one supplemented with micro doses of lithium :-).

Here is how they changed the omega 3 compared to Gesch:

In all, 221 young male prisoners completed the study. Many dropped out, often due to transfer to another prison or being released. Of the completers, numbers of violent events in the active group dropped 34%, whereas incidents in the control group increased 14%. The overall number of incidents was lower (11 per 1000 person-days) in the Dutch prison compated to the UK one, but the percentage change was still significant. There were no significant differences in any of the cognitive, personality, and behavioral testing measures used, just the actual incidents. Which is interesting. Because you can't figure out, from this data, why the incidents decreased. If you could say - oh, look, impulsivity and attentional measures improved, then you could say that's why the behavior is better. But they didn't improve. Which means maybe the cognitive measures aren't very good, or the effect was too subtle to catch. Well, I know a prison warden cares more about decreasing reported numbers of violent incidents in a prison compared than decreasing the psychologic testing measures of impulsivity.

One problem with this second study is that at the beginning, 51% of the prisoners guessed wrong as to whether they were receiving active vs. placebo pill. By the end, only 25% guessed wrong, suggesting the blind was somehow partially broken (perhaps by smell of the pills?). Violent incidents were measured by the prison staff, it is unknown whether the prisoners told the staff if they suspected active or placebo pills. So keep that in mind when interpreting the results.

Here is the Dutch researcher's conclusion, and it will serve as mine as well:


To summarize, the prospect of influencing aggression and rule-breaking behavior with nutrients in moderate doses is important enough to warrant further research. This is particularly true as adequate supplementation may also have beneficial effects on mental health and cognitive functioning [Benton, 2001; Hibbeln, 2001; Richardson, 2004]. This study, however, did not confirm this association, except for some marginal trends in this direction. Yet, as the found decrease in the outcome measure—reported incidents and rule-breaking—is in line with the earlier British prison study of Gesch et al. [2002], we feel that further research on the association between dietary status and violent behavior is warranted

* I really enjoy Paul's blog, Questioning Answers, focused on research and thoughts about autistic disorders. He is far more sober in his interpretation of the science than I am myself - which is likely a far more accurate portrayal of the validity of the results.
Posted by Unknown at 12:00 PM