Pathophysiology of Depression and Happiness

I'll be on the Creative Live video podcast later today (3pm pacific, 6pm eastern) on the topic of happiness (Dave Asprey invited me to participate, and while he is going into some of the technology he uses to monitor his brain and functioning, I'll be talking about some of the research about happiness and different Eastern and Western perspectives.)

Just going through an amazing review from Neuroscience and Biobehavioral Reviews: Potential roles of zinc in the pathophysiology and treatment of major depressive disorder. I'm going to do an updated zinc post (which is why I pulled the paper), but it does have a terrific and concise review of the biology of depression and, as it happens, happiness. Though this biochemistry will not be part of the talk later today. Suffice it to say (click the diagrams to make them bigger if you like): 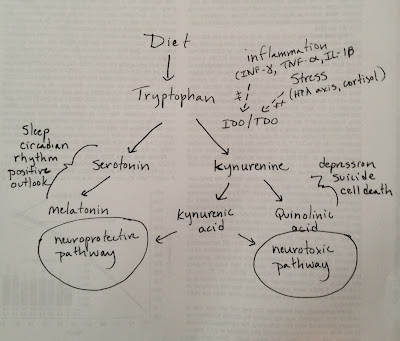 So diet provides the amino acid tryptophan, but circumstances can push the metabolism in two directions, toward the neuroprotective, neurogenerative and repair pathway (via serotonin and melatonin) or to the neurotoxic pathway. Stress and inflammation tend to favor the production of kynurenine, which can become quinolinic acid (a potent oxidative agent and neurotoxin) or kynurenic acid (which can go both ways, more on that in a bit).

On the neurotoxic pathway, quinolinic acid triggers the release of glutamate via alpha 7 nicotinic acetylcholine receptors and may also directly stimulate the NMDA receptors. High levels are associated with reduced neuronal growth and repair in the hippocampus of the brain along with markers of neuronal injury. Kynurenic acid, also made from kynurenine, can ameliorate this pathway somewhat by modulating the activity of these alpha 7 nicotinic receptors, but in the wrong amounts kynurenic acid can be neurotoxic as well. In layman's terms you get depressed mood, irritability, suicidal thoughts, memory problems, poor resistance to stress, dysregulated energy metabolism, poor sleep or unrestorative sleep. Poor motivation and reduced concentration. The brain just doesn't function well. 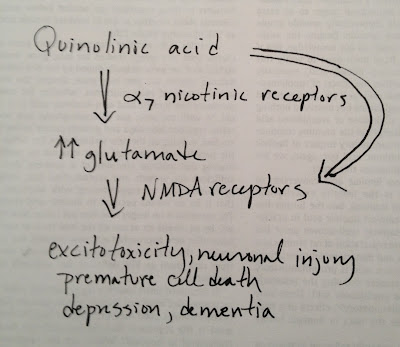 On the bright side you get serotonin and melatonin supporting sleep, appropriate circadian rhythms, appetite and hormonal regulation, and then the effects of reduced excitotoxicity via various receptors and components including 5-HT1A, leading to good memory, good neuronal plasticity (which permits adaptation to new experiences and stimuli), and appropriate levels of brain derived neurotrophic factor and dopamine (some of these are mediated by insulin growth factor 1 by the way) toward neurogenesis and neuroprotection. So here we have good memory, good sleep, regulated energy metabolism, positive outlook, motivation, serenity, and appropriate resiliency to stress. 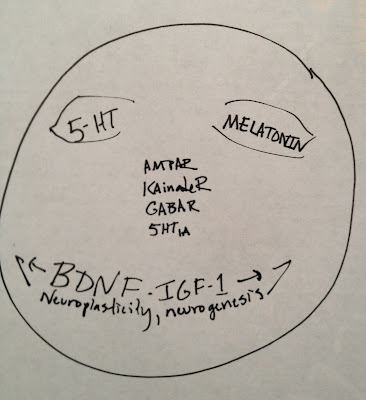 My apologies for the low tech diagrams, but hey, this is a free blog after all…zinc, by the way, plays a role at almost every level in these pathways. But more on that in a bit!