Does Soda Rot Your Brains Along With Your Teeth?

This study made big news last week, but I was in the midst of AHS13 in Atlanta, and besides the normal conference exhausting insanity, I also had either food poisoning or some sort of gastroenteritis. Only now I'm recovered enough to unbury myself (more or less) from the usual home and work chores.

U2 Some Days Are Better Than Others

I'll do a companion post on AHS13 and my talk there in a bit, but I did want to do a quick review of the horrifying study tracking soda consumption in 5 year-olds. The study was part of a Fragile Families and Child Wellbeing cohort of about 3000 urban US children and their mothers from 20 different cities. The sample is 51% African American, 28% Hispanic, and unmarried mothers outnumber the married ones 3:1. In this cohort,  43% of the 5 year old children consumed at least one soda per day, and 8.2% drank three or more servings a day. Those who did drink 4 or more sodas daily were over twice as likely to destroy things belonging to others, get into fights, and physically attack people, and violence across the cohort linearly correlated with the amount of soda consumed. We've seen a similar pattern in a previous study of adolescents. No one has measured it in young children before.

Covariates included violence in the home, fruit juice and candy consumption, obesity, maternal education, and hours of TV watching, and when the statisticians took these confounders out, the correlations between violence and soda consumption still held. Perhaps the most interesting bit of the study is that fruit juice consumption was correlated with less aggression and candy with mildly increased aggression, so sugar itself is clearly not the whole story here. The authors had all sorts of guesses as to what might be going on, but with the observational nature of the study they are only hypotheses. The main theory is the magical combo of preservatives, caramel coloring, caffeine, and sugar is a quick ticket to aggression and wild swings of blood sugar (though blood sugar wasn't measured). Since soda consumption is also correlated with depression in adults, and depression in parents is correlated to behavioral problems in offspring, high soda-drinking moms might be depressed with high soda-drinking aggressive kids.

Regardless of the whys and wherefores, one doesn't have to go too far out on a limb to say that giving kids soda is a lousy idea, and that the sugar alone is not the problem or only a piece of it (despite my fondness for the fructose malabsorption theory). 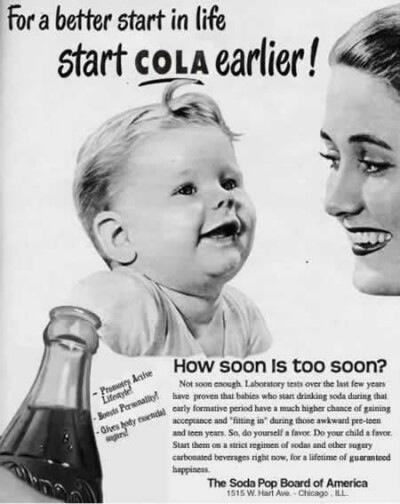