Hope you are having a great time on your Turkey Day (assuming you celebrate it as the majority of my blog readership does). I baked a paleo pumpkin pie last night, and today I'll make (and eat) the crab stuffed mushrooms (finally, a use for the oregano plant we mostly killed in the fall) from the same Everyday Paleo page. We're having our turkey (I'm told it is organic free range, and if it isn't, I don't want to know) with some relatives on Saturday, so by then no doubt I will have baked another pie to bring with me to the gathering, only this time I'll likely add vanilla and coconut flakes to the butter pecan hazelnut crust. Yum! Gotta love a Thanksgiving where you don't even mentally count the fat grams. Just avoid the gluten...but the rolls and stuffing were never my favorites anyway. Give me meat and pie and I'll be happy.

which will be, once again, the major source for much of the information here, though there will be some from the psychiatry clinical trenches too (let's assume I did learn something in residency). Dopamine is special because it divides the humans from the beasts, as it were, and yet some of our more bestial qualities stem from chasing that dopamine feeling - via ultimate fighting, cocaine, speed, and also the reward pathways in binge eating, drinking, gambling, shopping, etc. etc. etc. Anything that involves competitiveness, drive, sex, planning, working memory, concentration, aggression... dopamine plays a role.

Dopamine is distributed quite differently on the different sides of the human brain, and is is speculated that this lateralization is responsible for how very human we are. The left brain (in almost all right-handed and most left-handed people) is responsible for language, linear reasoning, mathematics, that sort of thing, whereas the right side is usually responsible for intuition, holistic reasoning, some elements of music and speech intonation, etc. It's funny, really, how different the sides of the brain are. They look much the same. My right and left lungs look a little different, but they have the same function. My right and left feet do pretty much the same thing. But remove my left brain, and I'll be a different person. Amazingly, if one is young enough, half the brain can be scooped out and removed (if necessary, usually to control intractable seizures), leaving the child with pretty normal intellectual functioning (though motor functioning on one side is usually irrevocably lost). This finding (among others) led one prominent neuroscientist to pen a famous chapter called "Is Your Brain Really Necessary?"

The human brain has 100 billion neurons. Only 20,000 or so carry dopamine, and they do so along four major tracts. Keep in mind that the brain is a gorgeous and mysterious place with many wonderful names, like Rivendell or Brigadoon. The areas are named either anatomically (the dorsolateral prefrontal cortex) or because it reminded the anatomist of yore of some other important anatomical structure (the mammilary bodies). Or for some other obscure reason (the tegmentum? Oh, that's Latin for "covering." Okay!)

Dopamine is made in two little areas in the deep animal recesses of the brain - the substantia nigra and the ventral tegmental area. From these starting gates, the dopamine tracts reach out to various segments.

1) The nigrostriatal tract is important to neurologists. It brings dopamine from the substantia nigra to the striatum or "basal ganglia." These neurons are responsible for a lot of the motor control of the body. Death of dopaminergic neurons in the substantia nigra leads to the symptoms of Parkinson's disease - tremor, stiffness, loss of voluntary movement (though someone with advanced Parkinson's may not be able to toss a ball to you, if you toss a ball to him, he might be able to use different reflex motor brain tracts and catch it). This pathway is also affected in various choreas, such as the possibly wheat-related Huntington's Chorea.

2) The mesolimbic pathway goes from the ventral tegmental area to the limbic system. The limbic system of the brain controls reward and emotion, and includes the hippocampus and the medial frontal cortex. This is the pathway that is thought to be responsible for addiction and psychosis.

3) The mesocortical pathway goes from the ventral tegmental area to the dorsolateral frontal cortex. This is the pathway responsible for planning, responsibility, prioritizing, motivation, and some elements of emotional response. This is one of the damaged areas in ADHD and depression.

4) The tuberoinfundibular pathway has my favorite name (though not as fun a name as the as the anterior inferior thoracoacromial artery). It's a dopamine pathway between the hypothalamus and the pituitary gland, and the most important part is that dopamine inhibits prolactin release. So inhibiting dopamine means prolactin increases, enabling breastfeeding and whatnot.

Having fun yet? In psychiatric terms, the mesolimbic and mesocortical pathways are by far the most important. They have a lot to do with how we behave, and who we are. Now go eat some turkey and be happy. 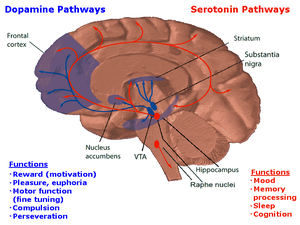