Do you guys know Martin Levac? I don't either. He's someone who has been active and entertaining in the comments section of Denise Minger's big China Study post, and towards the end of those comments he started to mention some human experiments in semi-starvation. Semi-starvation means cutting lots of calories to lose weight, and is eerily close to what the government recommends for us to try when we are trying to lose some extra pounds. In the human experiments where people actually lost some meaningful weight (only successfully done under lockdown), it has been a disaster.

Martin not only mentioned the famous Ancel Keys study from WWII (I have a brief post on it from July, but the bigger link is to a more thorough post Dr. Eades did in 2007 - and if you are really interested, he linked a video a few months later), but also the experience of the eight people more or less hermetically sealed into a big greenhouse in Arizona for two years in 1991-1993. The big greenhouse is "Biosphere 2" and the tale of this $200 million experiment is both amazing and flabbergasting. Worth a post or two.

Much of my information in this series of posts will be from one of the biospherian's books, The Human Experiment: Two Years and Twenty Minutes Inside Biosphere 2

. There are also a number of published scientific papers available, some accessible from the Biosphere 2 website, and a decent wikipedia article.

First, a little background. Biosphere 2 was meant to be a study of a large (3.15 acre) sealed ecosystem, with desert, ocean, rainforest, agriculture etc. along with human habitat and support. In some respects it would offer the first experimental large-scale look at how ecosystems interact, insights into the carbon and nitrogen cycles, and also a possible first blueprint for recreating Earth (biosphere 1) for space colonization. The project was originally conceived and executed by a group of adventurers, artists, and philosophers known as the Synergists, who had the backing of Texas gazillionaire Ed Bass. They had a number of other enterprises, including an art gallery in London, a cattle ranch and pastoral restoration project in Australia, a ranch and retreat in New Mexico, and an oceanic research vessel called the Heraclitus. Biosphere 2 was a heroic effort, and beautifully constructed. 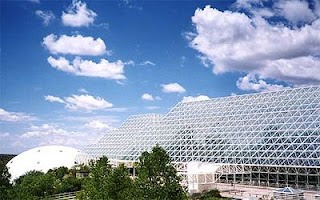 As a private venture, the designers and leaders had a lot of leeway as to how the whole experiment would be conducted, and what sort of people would be chosen as the 8 member crew who were to live in the sealed ecosystem for two years. Thus the crew had some scientific experience, and there was a doctor, but many were adventurers who had lived a Synergist life, sailing the world doing research and working in the Outback. Since the two years would be isolating and require hard physical labor, ingenuity, and technical skills, these weren't the worst people to close up inside. But the human element remained problematic throughout the history of Biosphere 2.
The overall "success or fail" goal of the first Biosphere experiment was to keep the darn thing sealed for the whole two years. Nothing other than thermodynamic energy (such as sunlight) and electronic communications would go in or out. Everything would be recycled. In case of medical emergency, an airlock was created so it would be possible for supplies and humans to go in and out without messing up all the measurements. But considering that for the first time, humans were creating a complex ecosystem and populating it with everything from scorpions to microbes to coral reefs to crops and pests, to have success or failure balance on the "closure" of the experiment for such a long time seems, well, ridiculous. But that is how the media, the biospherians, and the leadership of the venture viewed it then. That goal led to some fairly... interesting decisions along the way, especially with respect to the health of the crew. But turns out we did get another semi-starvation experiment out of it!
Prior to closure, the biospherians were already working inside the Biosphere, growing crops, making sure everything worked, etc. From this work, the crew member responsible for Agriculture, Jane Poynter, had predicted that they would be able to grow 80% of the food they needed within the biosphere. This was actually quite an achievement as the farm was 1/2 acre or so, and had to be entirely organic and self-sufficient - so no chemical fertilizers, no pesticides (as any poisons they sprayed on the plants would be sealed up inside the Biosphere with them). According to Jane, however, this number was not acceptable to management, and that 80% was somehow turned into 100% by putting the crew on a "calorie restricted, low-fat, nutrient-dense diet." Insult was added to injury by the fact that the diet was nearly vegan (they consumed a little goat milk, and meat and eggs perhaps once a week). To give you an idea, over the course of the first year, the diet was about 50% sweet potato, and 31% of the fat they consumed was from the bananas.
The doctor on the crew, Roy Walford, had spent much of his career researching low-calorie diets as they relate to longevity, so this was the perfect experiment for him! Unfortunately he would die of ALS at the age of 71 in 2004. But he did publish several papers on the Biopsherian diet, one of which we'll review now, which is optimistically titled: "The calorically restricted low-fat nutrient-dense diet in Biosphere 2 significantly lowers blood glucose, total leukocyte count, cholesterol, and blood pressure in humans." Free full text, so go take a look. Actually, go ahead if you haven't already and scan my little post on semi-starvation in WWII and then go take a look.
It is perhaps predictable that Biosphere 2 had some crop problems, and the crew in the first six months was restricted to an average of 1780 calories daily. Now that's more, actually, than Weight Watchers (tm) would likely have me eat on a weight loss diet (20 points, I think, would be my allotment!), but the Biopsherians were engaged in hard physical labor much of the day. The carbon dioxide levels were rising, so they continuously had to harvest and sequester biomass all over the facility, and shovel and scrape carbonate off their home-made natural CO2 scrubber. Not to mention the farming itself, harvesting rice paddies, threshing wheat, milking goats, the whole shebang.
Some of the glass panels admitted UV light to help the reptiles survive, but the humans were allowed supplementation with 400 IU vitamin D, vitamin B12, folic acid, 400 IU vitamin E, 500 mg of vitamin C, and calcium. They ate three meals a day, equal portions between men and women.
Not surprisingly, the Biospherians lost weight. Lots of weight. Men lost 16% of their BMI in 6 months, women 11%. Average systolic blood pressure decreased from 109 to 89, and diastolic BP decreased from 74 to 58. Mean total cholesterol decreased from 191 to 123. HDL fell from 62 to a dismal 38. The "risk ratio" of total cholesterol to HDL remained about the same. Triglycerides decreased in men (from 139 to 96) and increased in women (from 78 to 114). Fasting glucose fell from 92 to 74.
So how much fun did the crew have on this diet? Well, Walford is practically mute on the subject in his paper. There's one sentence. "At six months, both sexes were at a body fat composition at the lower bounds of normal but reported no ill effects." Enter The Human Experiment: Two Years and Twenty Minutes Inside Biosphere 2

, where Jane Poynton describes hunger, fatigue, mental fog, licking each plate rather obsessively and elaborate food rituals, and depression. Her descriptions very much remind me of the rituals in this book: Wasted: A Memoir of Anorexia and Bulimia (P.S.)

. The blood pressures described above also remind me of the ones of teenage girls in the child psych unit where I worked as a resident - girls who were there due to eating disorders.
Some quotes from Jane's book:
"We were, however, becoming ever more obsessed with food." "When watching a film, I would focus on the eating scenes, forgetting the plot." "Sometimes we lined up in the second story windows of the Habitat and took turns peering through binoculars at fat people (for everyone seemed overweight to us then, even the slender people) who were spurting ketchup on sausages and shoveling them into their mouths. We were culinary voyeurs." "I dragged myself from chore to chore, taking twice as long to weed a sweet-potato field as it should have taken, skipping other chores. I am used to being strong and vital and I felt far from that most of the time." Jane notes that the only locked door in the Biosphere 2 was the door to the banana room, as the succulent fruit was far too tempting.
We can't separate the diet of the Biospherians from the low light, increasingly low oxygen (turns out oxygen was reacting with the concrete structure, leading to gradually and continuously lower levels, until the Biospherians had sleep apnea and couldn't complete sentences, so eventually oxygen had to be piped in during the second year), and the difficulty of isolation. For the last 14 months of the first mission, the eight crew members were split into two factions and would not make eye contact or speak to each other unless absolutely necessary. Apparently, one of the crew set up funding for psychological monitoring and counseling ahead of time, but this experiment was rejected by management. Frankly baffling, considering how useful the information might be for, say, NASA or anyone else planning Antarctic missions or long-term space missions. Not to mention you have 8 starving, oxygen deprived, suffering Biospherians running the $200 million experiment. Never would have passed an institutional review board at an academic medical center!
There's more to this tale of the Biospherians, and some lessons for medical science. But for now, just remember, semi-starvation is a tough row to hoe. Each and every time it is tried.