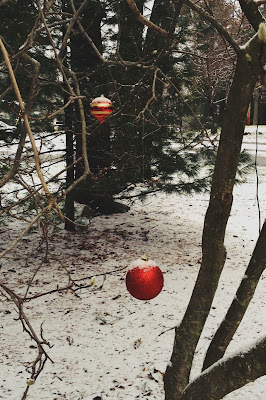 Merry Christmas to all who celebrate! We awoke to full stockings and a bit of snow on the ground.

Yesterday, my sister-in-law gave me a sheet she copied while reading David McCullough's biography of Harry Truman.

Truman was the thirty-third president of the United States. In his seventh year in office, when he was 67, he was described as a "picture of health." He walked two miles almost every morning, followed by an ounce of bourbon. In his diary he wrote the following about his diet in the early 1950s:

I eat no bread but one piece of toast at breakfast, no butter, no sugar, no sweets. Usually have fruit, one egg, a strip of bacon and half a glass of skimmed milk; liver and bacon or sweetbreads or ham or fish and spinach and another nonfattening vegetable for lunch with fruit for dessert. For dinner I have a fruit cup, steak, a couple of nonfattening vegetables and an ice, orange, pinapple, or raspberry…So--I maintain my waist line and can wear suits bought in 1935.


Not sure what a "nonfattening" vegetable is…Truman eventually died in 1972 at the age of 88.
Posted by Unknown at 1:24 PM