It Starts With Food and Two Years of Evolutionary Psychiatry

I first met Dallas and Melissa Hartwig at AHS11 at UCLA. They are formidable, friendly, bubbly, beautiful, and very tall. I first heard of them several months earlier from Jamie Scott, and then remembered a spat back and forth between Kurt Harris and someone named Dallas over dairy in the comments of Kurt's blog (then named PaNu). Shortly after that, I received a comment or email from Dallas writing he was adding me to the "resources" list of the Whole9 website ("if you care" he said, which I thought was funny.)

I poked around the website and decided to do a Whole30 leading into the inaugural Ancestral Health Symposium. I didn't achieve a "perfect" 30 days due to a vacation to Santa Fe, but I did have some very positive effects which I wrote about in this post. In the mean time, Dallas and Melissa had become part of a group of paleo journal club buddies who pass around interesting papers and whatnot, and they supplied me with a copy of their Whole30 Success Guide. Since then I've also ordered a couple of their T-shirts (one for my sister-in-law who is a big fan), and while they let me buy the gift, they always gave me my shirts with the admonishment that I was not to buy them (I have a feeling they are fond of me, and maybe one day I can leverage that so they can teach me to snowboard or something :-).  We met again at PaleoFx and bonded over our shared relative certainty that the consumption of starch (GASP) was not going to lead us to an early grave (don't even get me started on that one).

All this exposition is my way of giving you full disclosure. And it is a bit fun to walk down memory lane. I started this blog almost two years ago exactly, the readership blooming within a few months thanks to links from Nephropal, Mark Sisson, and Kurt Harris, and later Stephan Guyenet. In the intervening years, I've had the opportunity to meet or correspond (sometimes at great length) with most of the major ancestral health figures, and Dallas and Melissa are among my favorites. It is no secret that Kurt Harris is another great favorite, but I have to say that in his N=1 exchange with Dallas above, I tend to side with Dallas, though a bias comes from me and my family having some issues with dairy. Kurt's arguments (as always) are extremely solid and reasonable. It's also funny how much has changed these past two years, how much online drama we've endured, and how my internet friendships have expanded to include so many people from all over the world. I haven't looked at my oldest blog posts in quite a long time, and I wonder how much I will cringe at my certainty, my style, and ignorance displayed in those first months.

I'm not yet marinated enough in this evolutionary medicine adventure to write a book.  Dallas and Melissa, however, have been working with their paleo-style food and lifestyle both personally and professionally since about 2006 or so, experimenting with their first Whole30 in 2009. I've known they were working a book for quite a while, and was honored when they asked me to review one of their final drafts and perhaps write a quote for the jacket. I was very pleased with It Starts With Food and ended up at the top of the back cover. 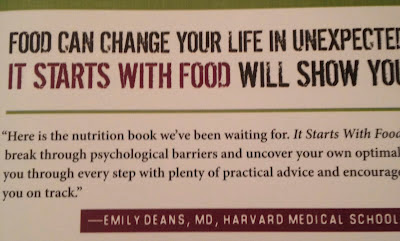 I loved the practicality and writing style of the Whole30 Success Guide, so it was no surprise to me that It Starts With Food is an easy and solid read with good narrative drive that takes you right through. It is not the slog of some nutrition books, comparable to the fun read of The Primal Blueprint.

There are two things about this book, however, that take it beyond the previous Paleo bestsellers. One is the terrific attention to the psychology of change and how modern food affects the way we think and crave. Another is the attention to science and how Dallas and Melissa are careful not to overreach. I know they vetted the manuscript with a number of folks, including the Kracken, hoping not to make the mistakes of Paleo past (such as strict prescriptions for carbohydrate grams or saying that legumes will kill you via the power of phytates and lectins.) Their Rx is orthodox Paleo (plus a helping of healthy fat) but they have good solid reasons why every step of the way. Their idea, like Robb Wolf's (and borrowed and attributed to Robb Wolf) is a "perfect" elimination diet, from which you learn a lot about yourself and add back in other likely healthy foods to figure out the balance of your best nutrition with your life.

The psychology piece is incredibly important. It is not easy to do a Whole30, even if you don't have many emotional issues with food, or even if you have weight to lose or are fighting a live threatening condition such as an autoimmune disease to give you plenty of motivation. Mark Sisson breezes past the psychology with his 80/20 rule (not a bad rule for many, though I find I need more like 95/5 to stay lean and sharp), and Robb Wolf in The Paleo Solution had a tough love approach "buck up buttercup" or something to that effect, which I found a bit cringe-worthy (sorry, Robb).  His blog is never like that.

It Starts With Food gives us tough love with extensive handholding, which I know through plenty of clinical experience with addiction and eating disorders is the most effective non-pharmacologic and non-locking-people-up-for-a-spell way to get people through the first rocky part of a major life change.  In addition, with the science and unknowns fully acknowledged, I can recommend this book to my patients and relatives without caveats, which is why I said in my quote:  "Here is the nutrition book we've been waiting for."

I also love how Dallas and Melissa address the so-called radical nature of the fad "Paleo diet" (bizarrely downtrodden by the conventional nutritionists, dieticians, and doctors in so many mainstream publications compared to such champions of processed food as SlimFast and WeightWatchers).


"It's really not that radical--unless you consider eating nutrient-dense, unprocessed food radical.  Which, in today's microwave-dinner-fast-food-low-fat era, might very well be the case."

This book is Dallas' side of the argument with Kurt Harris.  It says, look, there may be some people who are perfectly healthy eating dairy, but it is worth eliminating it from your diet for a spell to see how you do. Some people, like me, will find fat mass, complexion, and GI tract all the better for it.  Others will not. Some will do very well with a bit of black beans (I do) whereas others will find it disturbs the intestines. And, again, there is nothing radical about a 30 day prescription of elimination. The real question is, what do you do for the rest of your life, and the transition to beyond the Whole30. Dallas and Melissa have plenty of answers for that as well, as does everyone else…let the debates begin.
Posted by Unknown at 3:24 PM