Ring in the New Year

Whew.  A bit of a hiatus there.  I hadn't quite realized how much I had overextended myself until decamping to Texas for some serious sitting around.  There I had all sorts of unrealized ambitious plans to read and get caught up, visit some local Crossfits, answer some emails, etc.  I did very little at all besides the holiday stuff, a handful of morning runs, and reading some fiction.  Since the whole family was recovering from a steady onslaught of viral preschool nastiness that began before Thanksgiving, I sorely needed the rest.  A very mild but persistent case of walking pneumonia had settled in, so it was nice to take it easy and finally get well.

In the midst of the sitting around, I was able to visit two Austin "real food" restaurants, Hudson's on the Bend (where I had rattlesnake cakes - not gluten-free but very tasty, and Hudson's has several gluten-free options) and Foreign and Domestic (steak and pigs brains.  I have to say the brains at Animal were better, but the steak at F&D was fabulous, the yogurt with dill sauce sublime, and the atmosphere quintessential Austin).  I'm told the Noble Pig is also excellent (though it is a sandwich restaurant). 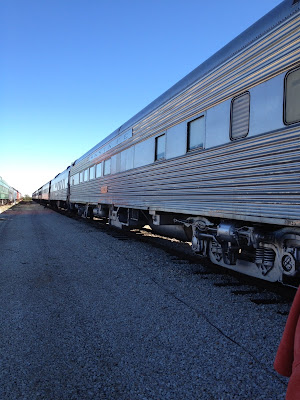 At this point I have numerous articles and a large stack of books waiting to be read.  I'm hoping that without my class, my schedule will be a bit more forgiving.  You never know what will turn up, however, and the backlog of emails and to-dos--formidable!
Posted by Unknown at 2:39 PM