Is Some Psychiatric Disease a Manifestation of Lyme Disease?

Hello there!  I’ve been offline at home for the past week, ever since the big snowstorm that came through the northeast in late October.  The wet, heavy snow landed on trees that still had their leaves, leading to incredible amounts of damage and fallen limbs.  That night as the snow fell, we listened to branches cracking and snapping and falling and saw arcing electricity light up the sky as wires were torn down.  By morning hundreds of thousands of people were without power, including us — our wires were pulled off the side our house by falling branches.   30 foot tall trees were snapped in half, like toothpicks.  (That picture is of the end of our driveway) 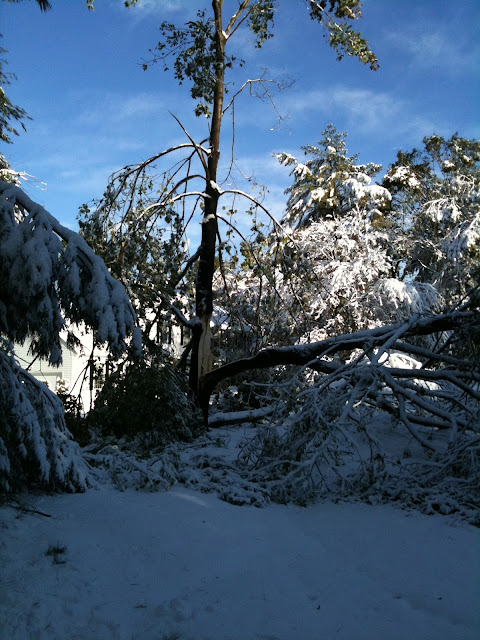 On the Friday before the storm I received my order of 60 pounds of grassfed, high quality beef from Paidom Ranch in Texas.  On Sunday morning I filled 20 freezer bags full of the fresh snow and stuffed them in the powerless freezers and fridge, so the meat was still nice and frozen even after a few days without power.  Without heat and daytime temps in the mid-fifties, it might have been just fine as it was.  Halloween was put off until the following Friday night, though the neighborhood is still a mess.  Power came back in two days, but our wires were still on the ground, caught in a turf war between the utility company, local electricians, and the town inspector.  Back in Texas where I’m from, the utility company is responsible up to the meter — here there is something of a gray area between the property line and the meter, which would be okay, except you are at the mercy of the utility company as to when the power comes on and off so you can repair the lines on your property, leading to the ridiculous situation where we had live wires ready to electrocute anyone unlucky enough to trespass for several days, until the town inspector intervened and made the power company fix the problem.

Well.  As I write this article, we are still offline at the house with respect to cable TV, landline phone, and internet (so-called bundled services are so much fun!).  I’m hoping it will be back in the next several days so I can publish — fortunately the smartphone works for email and the like.

But enough of our tale of first world woe, except the disease I am about to discuss has long been maligned due to the attention it has received affecting wealthy Connecticut kids.  However, I’ve seen many afflicted folks in my practice here in Massachusetts, and several family members and friends have been treated for it.  So I take Lyme Disease, or Borrelia burgdorferi very seriously.  Borrelia, along with several other nasty organisms, such as the microbes that cause babesiosis, ehrlichiosis, Rocky Mountain Spotted Fever, and rickettsia, are all spread by dirty tick bites.

(Quick and easy tic repellant for the spring and summer - 2 tbs coconut oil, 1 tbs aloe vera gel, 25 drops gardenia or rose oil, 25 drops lavender oil. The essential oils can be found at Whole Foods. Stir and smear on ankles, wrists, forehead, nape of neck, belly, and anywhere else tics are liable to climb in.  Last summer prior to use of this ointment we had 6 tics found on kids and husband (tics and mosquitos do not like me - I am too sour) - afterwards no tics whatsoever. Thanks to @OldSalt72 for the link to the recipe)

Lyme disease is endemic to the area in which I now live, and if transmitted, can become a multisystem inflammatory disease that can affect the skin, joints, heart, and nervous system.  Borrelia burgdorferi is a spirochete gram-negative bacteria in the Treponemataceae family, like the agent that causes syphilis, rather famous for its neurological findings, Treponema palidum.

Syphilis and tuberculosis are known in medicine as the “great imitators,” meaning these infections can be mistaken for many other problems, from psychiatric disorders to heart disease.  Lyme disease is very tricky as there are supposedly many false negatives when you check serology.  If you have a suspected deer tick attached for more than 24-48 hours here in Massachusetts, you are better off getting an extended antibiotic regimen just in case (for adults, doxycycline, for young kids, amoxicillin), considering the nastiness of the illness if not treated early.

In a paper from 2002, Hajek et al screened for antibodies to Borrelia in 926 Czech psychiatric patients between 1995 and 1999.  884 healthy persons were recruited at the same time from the general healthy population.  36% of the psychiatric patients were positive in at least one antibody class for exposure to Borrelia.  Only 18% of the healthy controls were positive.  That’s a rip-roaring difference, to put it in scientific terms.  Since the psychiatric group was older, statistically, than the healthy group, age-matching was done (statistically), and the results were similar.

An older study in the US showed very low seropositivity in a group of psychiatric patients - however, the general population in the US has much less exposure to Lyme (1% as opposed to a much higher percentage of folks in Europe), and the assay used to detect the antibodies was rather old-fashioned in the older study.  (Western blot in 2002 was gold standard, ELISA a close second, and flourescent immunoassay was used in the older US study).

The first immune response to Borrelia will be IgM antibodies, which peaks 4-6 weeks after infection, followed by the more specific IgG response, which peaks at 6 weeks, but like IgM can persist for months to years.  Antibodies circulating in immune complexes are likely to signify ongoing disease activity.

If Borrelia burgdorfi is related to psychiatric problems, there are two main mechanisms which could be responsible.  Patients vulnerable to psychiatric disease may also be more susceptible to Lyme or neurotoxic effects due to genetic or other factors.  Second, Borrelia may cause psychiatric symptoms, which is the most parsimonious explanation.  PCR analysis and other advanced methods ought to be employed in the future, and more surveys run on the population to better clarify this phenomenon.

In short, Borrelia burgdorfi is one of those suspicious, long-term, nasty  and sneaky pathogens that could contribute to inflammation and issues in the brain for years or decades.  It may be well one of the many inflammatory activators that are increasing our psychiatric diagoses in recent times, along with diet, lack of sleep, lack of sunshine, increased stress, and lack of exercise.  The problem with Lyme is that many people who seem to have symptoms (and even those with known tic bites and classic rashes) do not test as positive.  But is it really a solution to give everyone a course of doxycycline?  This issue is my question with respect to any infection that may have neuropsychiatric symptoms - we need more data.  In the mean time, I like anti-inflammatory, nutrient rich diets and plenty of sleep, sunshine and stress reduction.
Posted by Unknown at 4:38 PM