Alzheimer's Pathology and the Dementia-Free Kitavans 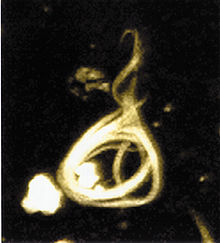 Over the last two posts I explored the theory that hyperglycemia might be one of the predisposing factors for developing Alzheimer's dementia.  The epidemiological studies looked pretty solid (though we know that a strict reliance on epidemiology can cause us to do ridiculous things, such as eating boneless skinless chicken breasts or, even worse, veggie burgers).  At least there was a plausible biochemical mechanism - high levels of insulin could interfere with the enzyme that clears away amyloid in the brain, thus allowing amyloid to build up into plaques.  Unfortunately, the smaller studies and autopsy studies Dr. Steve Parker linked in the comments seemed to show no link between Alzheimer's and diabetes.

The best hypothesis I could come up with, from the data of the papers from those posts, was that perhaps a combination of the genetic predisposition to Alzheimer's (carrying the ApoE4 allele) and diabetes could put one at higher risk.  People with ApoE4 seem to have lower amounts of enzyme to clear away amyloid in the first place, so add lots of insulin, and you've got plaque city.  But hyperglycemia alone wasn't going to explain it - though everyone agrees that hyperglycemia is rotten for the brain.

So what does cause Alzheimer's?  Truth be told, a whole cascade of things played out over decades (1).  Beta-amyloid peptide is definitely a key player, but it certainly isn't the only one.  It all begins with amyloid aggregating in vulnerable areas of the brain (called plaques - and this takes years and years), followed by accumulations of tau protein (called tangles).  The plaques and tangles (when I was in residency, there was a holy war going on between different sects of brain researchers about which was more important - plaques or tangles) seem to interact with inflammatory cells in a way that the accumulated plaques and tangles finally trigger diffuse brain toxicity and neuronal death.  At the beginning, measuring amyloid can predict problems even before someone experiences the first clinical stage of Alzheimer's called "mild cognitive impairment" (MCI).  The cognitive decline seems to be triggered when tau protein increases.  So, to recap - long symptomless amyloid buildup, tau takeover, inflammation and neuron destruction.  Boom.  Alzheimer's dementia.

Researchers looking just at amyloid ran into problems.  For example, there has long been interest in developing a vaccine against amyloid - sounds awesome, right?  Zap out Alzheimer's with our own immune system!  However, by the time the amyloid has accumulated to Alzheimer's proportions, it's very unlikely that a vaccine could reverse the course of the disease.  Vaccine trials (and trials of other drugs that lower amyloid production) even showed reversal of plaque build-up at autopsy, but the patients were still demented despite zapping the plaques.   If you wanted to stop Alzheimer's by targeting amyloid, you would need to start decades earlier, and no one wants to take an experimental preventative anti-amyloid medicine without a safety track record for a lifetime  (or at least I don't!).  However, this brings up the interesting hypothesis that low-carbers, paleo diet enthusiasts, Kitavans, or anyone who avoids hyperglycemia could be preventing amyloid build-up at this long prodromal stage, thus possibly reducing risk of later Alzheimer's.

But... there are types of frontal temporal dementias in humans that involve just tau protein, no amyloid required.  Any treatment or hypothesis that is focused on amyloid is missing a big part of the picture (sorry, plaque researchers!).  If you are looking to combat Alzheimer's at later stages of the disease (mild cognitive impairment and beyond) you need to fight brain inflammation and tau protein tangle accumulation.

The brain inflammation is, in part, mediated by oxidative damage (free radical ions roaming around and taking out proteins, fats, and brain DNA).  This has been known for quite a while, leading to lots of research into vitamin E (a known antioxidant) as an Alzheimer's preventative.  It works great in certain types of mutant mice, but was lousy in experimental trials of humans with MCI or Alzheimer's.  But vitamin E may not be quite specific enough, and lots of alpha-tocopherol (vitamin E) might even deplete our own self-made antioxidant gamma-tocopherol - meaning too much oral vitamin E could be pro-oxidant.  Oops!

Here's where it gets very interesting for the Kitavans and for certain evolutionary-minded psychiatrists.  The inflammation in Alzheimer's dementia is linked to eicosanoid production (2).   The actual process is dizzyingly complicated, with certain inflammatory markers (such as IL-1beta and complement protein) being pro-plaque and tangle in certain models of the disease, and anti-plaque and tangle at other times.  Seems that complement can lead the immune system to chew up plaques and tangles in an appropriate inflammatory response, whereas in Alzheimer's brains late into the disease, complement reactions are way out of proportion and likely worsen the problem, inviting a bunch of inflammatory fighting forces to the decimated neural battleground.  But, if you recall, the evolutionary medicine theory is that our inflammatory cascade is all out of whack due to the horrible Western dietary imbalance between the inflammatory and anti-inflammatory eicosanoid precursers, omega 6 and omega 3 polyunsaturated acids.

Well, if one is too afraid of Unilever and saturated fat to ask people to decrease their omega 6 consumption, one could do something chemically similar by trying to treat Alzheimer's with NSAIDs (naproxen, ibuprofen and the like).   The Anti-inflammatory Prevention Trial (ADAPT) looked at first to be a failure and was halted early over safety concerns.  But, something very interesting happened several years after the naproxen treatment was halted (about two years into the study)(3).  Apparently the treatment group had significant reduction in conversion to Alzheimer's Disease 1.5 years after the naproxen was stopped.  AND measurements of the treatment group's CSF at the same time showed 40% reduction of the tau/amyloid ratio.  That's good, as increasing tau/amyloid ratio is one of the markers of accelerating  cognitive decline in Alzheimer's.   Other studies have shown a reduction in dementia with long term use of ibuprofen (especially in ApoE4 carriers).

Now, since long-term NSAID use can kill your kidneys, cause ulcers and possibly heart attacks, it's not a great strategy for a primary population-based treatment of Alzheimer's.  I prefer the Kitavan approach - balance out those omega 3s and omega 6s.  (I'll go into the use of omega 3s as treatment and prevention of Alzheimer's in the next post).

One more thing about those Kitavans - island living may not be particularly stressful.  Chronic expression of the inflammatory cytokine IL-1 can interfere in the regulation of the HPA axis, resulting in the unfortunate elevation of glucocorticoids, like cortisol.  As we've discussed before, long-term excess cortisol is bad for the brain.  Interestingly, many Alzheimer's patients have too much cortisol (called hypercortisolism) that is not fully explained by damage to the hippocampus (4).  In Alzheimer's, the excess cortisol may contribute to insulin resistance and problems with energy regulation in the brain.  And, as we know, energy is everything when it comes to helping out a sick brain.

The boring thing about evolutionary medicine is that we have the same prescription for every problem.  Stop sucking down vast quantities of omega 6.  Eat a diet that won't promote obesity and hyperglycemia.  Get plenty of sleep and lots of play to avoid excess stress.  And who knows, we just might, eventually, prove that government panel wrong, as the Kitavans already have.  So maybe not boring at all, just completely intuitive, relatively simple, and AWESOME.

(picture of neurofibrillary tangle of hyperphosphorylated tau protein lifted from wikipedia)
Posted by Unknown at 10:02 PM