The Evolution of Serotonin

Jamie Scott's Midwinter Blues post was the fourth of four (unplanned) complementary fructose/fructan posts on Primal Muse and Evolutionary Psychiatry. Here's the whole "series" in case you missed out:

Anyway, I found Jamie's last post both extremely interesting and incredibly expensive.  He linked this article about sunlight and serotonin, which turned out not to be a paper, but rather the first chapter of the Handbook of the Behavioral Neurobiology of Serotonin. I know most of you might find a new pair of vibrams or Hermes perfume or The Primal Blueprint Cookbook: Primal, Low Carb, Paleo, Grain-Free, Dairy-Free and Gluten-Free

an irresistible purchase. I have a weakness for impenetrable neurological biochemistry tomes. Unfortunately my institutional access did not grant me the rights to the chapter (which could be purchased for $31), but I wasn't going to pay $31 for a single chapter when I could spend, say, 5X as much on the whole book. (Hopefully Mr. Dr. Deans is not reading this post...)  The good news is I get points on my credit card, so eventually I'll have enough to get a second iRobot 560 Roomba Vacuuming Robot, Black and Silver

. Or maybe even a iRobot 330 Scooba Floor-Washing Robot

.  Until then, I have my Handbook about Serotonin and we'll start with chapter one: Evolution of Serotonin, Sunlight to Suicide.

Biochemistry is all about energy and chemical reactions. And on planet Earth, most of the business of life occurs with chemical reactions driven by sunlight. The very first photosynthetic reactions occured with a molecule known as an "indole" - a benzene ring with a pyrrole ring attached. 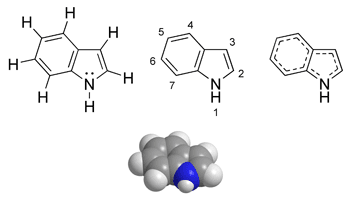 It's not obvious, but that molecule has lots of electrons whizzing around, and the carbon atom at position "3" above is extremely reactive and will lose electrons very easily.   Add light to specific types of  indoles, and energy will be created as molecular hydrogen is released.  It is postulated that this reaction first occurred on Earth 3 billion years ago.  This is the beginning of light-based life.

Tryptophan, the dietary amino acid (and the rarest amino acid in the diet, according to Primal Body-Primal Mind: Empower Your Total Health The Way Evolution Intended (...And Didn't)

) precursor to serotonin, is an indole.  It happens to be the most fluorescent amino acid under blacklight.  Tryptophan absorbs light energy, and is a vital amino acid for photosynthesis in sea bacteria, algae, and plants.  The process of photosynthesis creates oxygen from water, using the energy from the electrons whizzing around on tryptophan, among other things.  This creation of oxygen by photosynthesis changed our planet's atmosphere and made our lives possible.

Plants evolved a specific energy factory within their cells called a chloroplast, whose function is to capture light for energy, and to create tryptophan.   Chloroplasts are where chlorophyll lives.  Tryptophan is also made in all primitive unicellular organisms and plant systems.  Animals (like humans) do not make tryptophan and must obtain it through diet.  The best source for humans is from the meat of other animals, though tryptophan remains tough to get into the brain, as it is the least abundant amino acid in muscle tissue, and it has to compete with all the other more abundant aromatic amino acids (tyrosine, phenylalanine, leucine, isoleucine, valine, and methionine) for the aromatic amino acid transporter.  Everyone is waiting in the lobby for the elevator, and only a few can ride to the top at a time.

Serotonin is made from tryptophan only in mast cells and neurons.  However, cells in every single organ have special uptake proteins to capture circulating serotonin from the blood.

Other derivative molecules of tryptophan include melatonin (important in the sleep-wake cycle), psilocybin (the active molecule in psychogenic mushrooms), ergotamine, yohimbine (a traditional aphrodisiac), and LSD.  Most of these compounds are active in the human brain because they can stimulate the serotonin receptor.  A tryptophan-based compound called auxin affects cell growth in plants, enabling shoots and leaves to extend out towards the light.

In order to make serotonin, tryptophan has to go through a couple of enzymatic reactions.  First, tryptophan hyrodxylase makes tryptophan into 5-HTP.  Then tetrahydrobiopterin and aromatic amino acid decarboxylase (plus vitamin B6 and zinc) make 5-HT (serotonin).   Serotonin is degraded by MAO.

Tryptophan hydroxylase may be the oldest enzyme to attach oxygen to other molecules.  Since oxygen is generally quite reactive and toxic biochemically, this was an early way to safely get rid of excess oxygen created by photosythesis in primitive organisms.  The light receptors in the human (and other animal) retina are very similar to serotonin receptors and were first thought to evolve a billion years ago.  Serotonin is the oldest neurotransmitter, and the original antioxidant.  There are 20 different serotonin receptors in the human brain, and serotonin receptors are found in all animals, even sea urchins.

In other animals, serotonin is involved in swimming, stinging, feeding modulation, maturation, and social interaction.  In general, it is thought of as a growth factor for animal brains.  In humans, deficiency of serotonin is implicated in autism, Down's syndrome, anorexia, anxiety, depression, aggression, alcoholism, and seasonal affective disorder.  Light therapy and serotonin-increasing medications are both effective treatments for depression that occurs with low levels of sunlight.   Light exposure increases serotonin in humans, and serotonin levels are lowest in midwinter, and higher on bright days no matter what time of year.  10,000 lux light therapy decreases suicidal ideation.

Tryptophan is an important amino acid, most readily available from animal sources (vegetable sources such as pumpkin seeds contain phytic acid which may inhibit its absorption), and its many important  derivative molecules work best with plenty of sunlight.  Think of it as your own little bit of photosynthesis.  Sometimes we're not as different from cyanobacteria as we'd like to think...
Posted by Unknown at 4:19 PM