Robb Wolf, James FitzGerald and the Ghosts of Crossfit Past

Lessons in life are often repeated, and we may not get it the first time around.  A high school reunion is coming up, and I've had the opportunity to chat with some old friends not in touch for 20 years.  And despite those decades they are still the same, still terrific people.  When I find such friends I do try to keep in touch nowadays, as it is so easy to link a facebook account.  But of course there is no substitute for seeing someone live and in person.  Biologically speaking we use all our senses when meeting up with someone, note chemokines, subtle changes in expression, a lively or reserved manner, the sparkle in one's eye… or the threat, as it is likely murder was a big contribution to mortality in the past.  These non-verbal signals are why in clinical psychiatry practice even a video therapy session will never quite replace the in person visit.

Schubert Impromptu No. 3 (right click to open in new tab)

At PaleoFx12 I had the great pleasure of meeting several fellow "paleo MDs."  After the final panel I went with two of them (we shall call them Catfish and Hollywood*) to BBQ and the wild Austin scene of SXSW on a Friday night.  When one meets another paleo blogger intensely interested in the science, as at AHS and PaleoFx, it is rather like crawling out of the desert into an oasis of likemindedness.  Meeting other paleo doctors is like crawling out and finding the Taj Mahal.  I hate to get all "poor me, I'm a physician," but the current suffocating paradigm of American medicine can be so deflating.  In psychiatry we are squeezed into this impossible space between the FDA, Medicare, the scientific literature or "evidence base", common sense, expectations, history, and ethics.  Sometimes there are no right answers, and clinical practice becomes the square root of a negative number.  So to meet other doctors who look at the evolutionary paradigm, and have succeeded in their personal lives implementing it and are thinking about implementing it for their patients is exhilarating.  They understand the legal and cultural ramifications of such a change.  In a very real sense, we are a brotherhood, and they are my kin.  Such meetings can be intense, but fulfiling.  We walked together past the Texas State Capital at midnight, knowing we would meet the next day for an after-conference training session at a local Crossfit (appropriately enough). 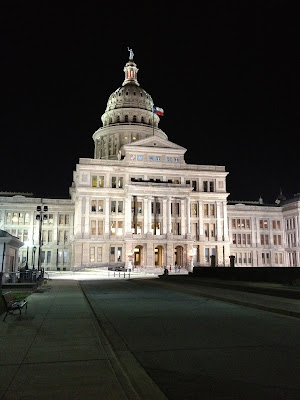 The training session was an OPT presentation by James FitzGerald.  Apparently he has the honor of being kicked out of Crossfit just like Robb Wolf.  And to me this situation (ghost-like at paleoFx as the last time Robb and James were in Austin was for the infamous Black Box Summit where they were summarily dismissed from the official Crossfit fold) is absolutely remarkable.

Have you ever met Robb Wolf?  He is an incredible presence.  Intense, organized, smart, driven, good-looking, and by all accounts devoted and kind.  Any reasonable business would love to have him as the poster boy of the Good Example.  James FitzGerald was a similarly impressive specimen.  It is hard to define him without using swear words (as he ended about every third sentence with one or another), but  it is clear from his presentation that he thinks in 17 directions at once, he cares intensely about athletes and training, and he has the wisdom to break it down and know what is going wrong to you can set it right.  Though much of the presentation went over my head as a non-trainer, I was captivated by James' ideas and break-down of the essential problems facing an athlete in an intense moment.  Is it blood flow, psychologic barriers, lungs, training, diet… whatever it is ask the athlete his or her experience after the WOD and he or she will tell you.  James has been in the research game from the beginning, and he noted with excitment that we could throw out the numbers from endurance athletes and straight -up weight training, as the differences with Crossfit-style training showed whole new numbers, and whole new possibilities of human capability.

How could Crossfit HQ dismiss James and Robb for the crimes of suggesting paleo nutrition, the idea of on-ramp beginners training rather than ubiquitous "scaling"  and *gasp* periodization?

The answer is in my wheelhouse.  Personality.  James and Robb with their brilliance and drive were a threat to the powers that be.  At that moment HQ were more comfortable jettisoning the bright stars than accepting new ideas.  As wildly off base as such a business decision could be, it makes sense in light of an understanding of a personality in charge confronted with the young challengers.

In the paleosphere we have the same challenge.  There are flamboyant and brittle personalities who insist they are correct, and new information coming online all the time.  What does the newbie hold onto?  With opposing and strongly-argued viewpoints, what do we believe?

Forget the paleo myths.  Forget the personalities.  Are you eating (for the most part) real food (excepting autoimmune disease).  Are you exercising?  How is your sleep?  What are you feeling?  What are the pitfalls?  What is your family doing?

Fix those issues and answer those questions first.  Know where you are, and then look for more guidance.  We are working on a network of doctors who might help.  I hope cults of personality won't get in the way, but don't let it confuse you.  What makes sense, from every angle?  Never suspend disbelief.

* so named because a woman at a restaurant mistook him for a Hollywood star.  And while he was certianly ruggedly handsome and in good shape, I felt the incident serrved as an example of how a good lifestyle and exercise regimen could beautify someone  to more mythical status...