Some Thoughts and Some Tchaikovsky

Certain composers seem to be able to understand the music that floats in the air between molecules, the music that describes the light, wind, war, and love. Tchaikovsky can be a bit too romantic, as the Russian composers were apt to be (a writer would call it purple prose), but in my mind there are few better songs than the 1812 Overture (right click in new tab to listen without leaving this page - this is the first part). A lot of folks dig the finale with the cannons and the fireworks, but my favorite part is the beginning choral and its recapitulation in brass just before the cannons start going off. When I listen to the 1812 Choral, I feel that Tchaikovsky translated a spirit, a meme, a truth, and that when it is over, I understand something more about being human.

In some respects, that is the lofty goal of this blog. What does it mean to be homo sapiens? How do we nurture a human, how do we heal? Since I have no patience for philosophy, I work in biology and biochemistry with a hint of practical psychology thrown in.

My style is to think out loud in blog form (such a wretched word, "blog," sounds like some sort of mucousy allergy problem). Some of the ideas are early, not fermented as it were, and I will likely change my mind about some things over the months. There are so many unknowns - it can get frustrating when you realize how much money, effort, and time have been spent looking at nutrition, metabolism, and mental health in such a way as to discover nothing at all.

But there is exhilaration too, especially in the sharing of ideas, and to have (if someone wants to listen) an enhanced ability to heal. Myself, my family, my patients.

I don't believe in magic cures. I agree wholeheartedly with this post on PaNu, about looking for that next secret, the next hack, the next way to measure your increments of success other than feeling better, lifting better, running faster or farther, and the pantsometer. Just eat well, get some sleep, play (outdoors if possible) and worry about the tablespoons of coconut oil when everything else is locked into place. Sometimes we are broken, and modern medicine can actually help with the fix. Sometimes we are broken, and there is no perfect fix.

It always settles me a bit when I find myself in agreement with Kurt Harris. Mostly because I can tell he thinks about things. He reads and sits back and asks some questions and reads some more and he thinks about it again, and then he posts. He is not as even-tempered as Stephan Guyenet, but if he jumps at being questioned, I'm pretty sure it is because he's done the time, the reading, and the thinking.

Sometimes I post first and think about it later. A different process, and in some ways a more prolific but scattershot result. And I believe the most important aspect of a "paleolithic-style" diet is the avoidance of inflammatory load. Not too much fructose, as little gluten as possible, and keep the PUFAs minimal with enough omega 3 to more or less balance the 6, and avoid all the fake food out there. My obsession is not with what exactly goes in the mouth but how the possible toxins meet the gut, the immune system, and the brain.

The audience for this blog grows and grows. It has tripled in the last three months or so, and given the growing interest and intrinsic common sense of the traditionalist/paleo diet movement, I imagine it will only get bigger. The concept is simple, the proof of concept a lot of work, especially when only a few of the researchers are asking the sorts of questions that will yield (or not) the answers we are looking for.

The picture below is of my great-grandmother, by all accounts an extraordinary woman who graduated from Vassar with a degree in Botany. She married a publisher and died at the age of 34. Her early passing I believe cast a shadow on my family that continues in some respects to my generation. 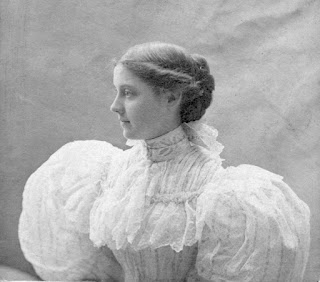 I'm tired of illness caused by bad advice, corrupt motivations, and incompetence. I love the study of medicine and the human mind. I read and I listen to find that truth, that meme, that whisper of the mathematical dance of molecules through the gut, the bloodstream, the brain. The spark of thought and what might strangle it or snuff it out. And that is the story of my blog thus far.