Where evolutionary psychiatry meets history and anthropology is where we become modern humans. It is a tricky question when that happened, because as best as we can tell, we have been genetically modern for the past 200,000 years, yet we didn't have beads and art and tool advances and religious icons and all those uniquely human attributes until 60-80,000 years ago.  Here's a song (right click in new tab) to get you thinking on it.

It is hard to imagine you and me and our neighbors sitting around twiddling our thumbs for 120,000 years - surely we would have carved a bead or two and perfected the spear along the way. But there's no evidence we did anything of the sort until some folks in southern Africa started munching on shellfish. All modern humans are descended from those southern Africans who later migrated up to the Middle East. And anthropologists who followed the trail of our ancestors found the first evidence of widespread consumption and transport of shellfish.

Shellfish are rich in iodine and omega 3 fatty acids. We've discussed the omega 3s at some length, but now let's look at iodine. Iodine is needed to make thyroid hormone, which in turn stimulates the enzyme tyrosine hydroxylase, which is an essential step in the making of dopamine, that neurotransmitter responsible, perhaps, for us being all too human. In addition, the omega 3 fatty acids increase dopamine receptor binding and dopamine levels.

Gagneux et al notes that there appears to have been a huge increase in T3 (thyroid hormone) with the advent of modern humans (chimps, for example, have much higher levels of transthyretin, which binds thyroid hormone and keeps it inactive). It is noted that both chimpanzees and Neanderthals had superficial features in common with developmentally iodine-deficient humans (large femurs, extended brows, and shorter stature). Humans have larger thyroids than chimps, whereas chimps have larger adrenal glands (brain dopamine is essential for inhibiting the systemic arousal caused by activation of the adrenal glands).

Shellfish aren't the only explanation for the rise of modern humans. After all, plenty of animals eat crabs and the like and they don't fly airplanes or...blog. Another (even more speculative theory) suggests that increased human intelligence via marine animal consumption led to longer lifespan, which led to increased populations and increased socialization, communication, and migration. The competitive stresses and achievement drives to out-perform one's neighbor would have plausibly helped to select for brains with more dopamine - though as you may recall there don't seem to be any specific genes for dopamine lateralization. And, once again, we are genetically and physically very similar to our ancestors of 200,000 years ago (except our brains are a little smaller). I'll let Previc explain: "Cultural and dietary influences on dopamine, transmitted prenatally, would have been passed on and enhanced in successive generations and thereby rendered a permanent part of our inheritance. Even when humans moved inland and no longer relied as much on aquatic fauna, their dopaminergically mediated cultural achievements were self-sustaining."  It was just around the time of this human mind "Big Bang" that we went through a population bottleneck.  All of us are descended from a few thousand people from 65-70,000 years ago - Previc doesn't mention this bottleneck in his book, but the timing is mighty suspicious.  It might be that only the humans who were able to fully utilize our super dopamine tracts were able to survive whatever crisis rocked our species back then.

So our ancestors did not need a monolith to spark our leap forward - we needed some clam-digging and crab catching. Iodine and omega 3s enhanced our dopamine-dependent traits - enhanced working memory, cognitive flexibility, the capability of thinking in temporal and spacial distance, creativity, and increased mental speed. This dopamine upgrade in our processing skills enabled art, advanced tool-making, language (not just speech, which seems to have evolved earlier), and long-distance exchange. It made us modern and uniquely capable of wonder and destruction on a scale known only before to nature itself. 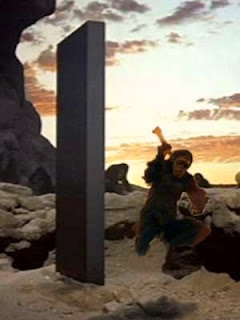